I buckled. I did. I looked at the Wacom Inkling on that Amazon page and thought…it’s available! …….again. I was one of the early crowd that was excited about the invention of this amazing little pen. But the fiasco with its release caused me such annoyance that I cast the idea aside and sent Wacom’s would be product packing. I mean, we’re talking several MONTHS of waiting. Not just “it’s coming out soon” kind of waiting, but the “we’re going to release now…uh…nevermind” kind of waiting. MANY times!

But the stars aligned and I found myself with a small chunk of change and necessity for a tool like the Inkling. And lo and behold, I have my product! 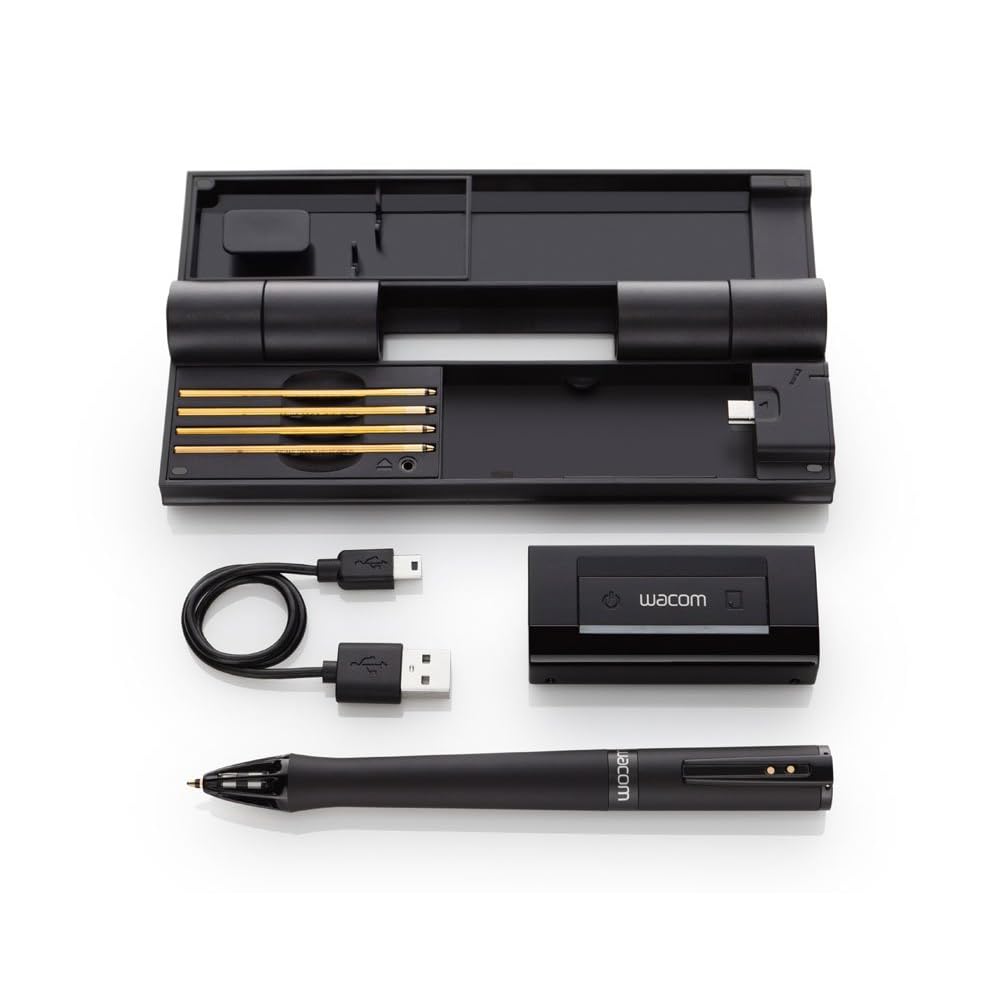 What is an Inkling? It allows you to draw using a pen-like tool (in this case, an actual pen with some digital modifications). The small box sits at the top of your page and captures the information as you draw so that later, through the graphical editing tool of your choice, you can use the image that you created in your digital project. Why is it necessary? Tablets are not the cheapest thing and not always the most convenient thing to carry around. Let alone some kind of Cintiq unit that is actually a drawable display. And when you’re out and about, you need something that’s compact and easy to use. I always have my notebook with me. And it’s easy enough to attach the digitizer at the top of the page and start drawing. It captures my work, and most importantly to me, allows me to create LAYERS of art so that later, I can separate the elements and make any fine-tuned adjustments that are necessary.

The pen and receiver are very compact. Easy to port. It’s a little bulky for a pen, but the design is nice enough to fit into my style of drawing. Keeping the tip of the pen in the viewing area of the receiver is easy enough. Importing into Photoshop was a breeze and all the layers were definitely captured. LOVE LOVE LOVE that it captures layers. Simple button click starts a new layer. Squeezing the receiver actually starts a new file. The thinking here is that you’re removing the receiver from the paper to start a new drawing. The software is fairly intuitive, though it took a little bit of research into the Help doc to export the right file format. There were a lot of complaints about being able to capture the movie of your art being built. Not a requirement for me. My end result is the file. I was getting used to HOW to draw with the product, so some of my work came out misaligned and rough. I had success with one of my drawings, so I just need to learn how I did that and do it from now on. For me, I think the issue was more user error than software or hardware, so I may have to do a follow up. Another great piece of this hardware is that it’s compatible with REGULAR pen tips! No proprietary equipment there. Nice.

Keep in mind that my experience was specific to a smaller notebook, I was just getting used to the pen and kept moving the receiver (whether with my hand or by moving my notebook), and I was in a rush to use it for the first time on a project I had to get out the door. SO!

First off, squeezing the receiver to start a new file is smart, unless you accidentally push your digitizer off the page and have to re-clip. This is a nuisance when you’ve completed a lot of your drawing because it creates a new file. This is especially annoying if you’re going into a shading mode and just wanted to create a new layer (Note: the workaround for this is to create the new layer/file, do all your shading, and then re-align in Photoshop.) The pen, like most ballpoint pens, has to be rolled a couple times to get the ink flowing. Not a big deal. But when you’re tracing your pencil art, the ball stops rolling a few times. The key here, I think, is to use the pen from start to finish. I’m a pencil guy, and so I did several sketches first, assuming I could just go over it with the pen later. I may see if there’s more of a quill type pen or something that flows easier than the pens they give you. Finally, the price point is nothing to snicker at! $200 for a digital pen, while much cheaper than a tablet, is still about twice as expensive as some of the solutions out there. Does the layer feature make up for it? I’m thinking…yes. 🙂

Overall, this product does exactly what it says. There’s some calibration that needs to happen, but I’m excited to apply it to my other art projects. I give this a B- since the first version of anything out the gate usually has some flaws. I hope this doesn’t go to the wayside. Talkin’ to YOU, Wacom!